A Weekend Bonus: The Bobby Burns 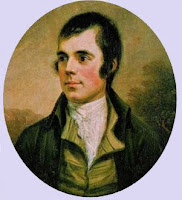 What do you get when you cross a Scottish poet laureate, an ancient order of French monks, and an Italian wine? A damn good cocktail: the Bobby Burns. I first tried this drink one night when the Texan, in one of his typical surly and challenging moods, came over and demanded a “good cocktail made with scotch.” Thinking that a Rusty Nail was not the correct answer (and having no Drambuie on hand), I found the Bobby Burns in one of my older cocktail books—apparently where it first appeared, in the 1930 Savoy Cocktail Book—and we were both instantly hooked.

The drink is named after Robert Burns, a Scottish poet, known as The Bard, who is widely regarded as the national poet of Scotland. And while I cannot recite his poems to you—other than to sing Auld Lang Syne on New Year’s Eve—he clearly had good taste in cocktails.

Ingredients
2 oz. Highland malt scotch (I prefer Ardmore, Dalmore, or any of “the Glens”)
.75 oz. sweet vermouth (this is one of the few drinks where I don’t use Carpano as I find it battles with the scotch; try a more subtle Dolin, Cocchi, or even a Martini & Rossi Sweet in this one)
1 bar spoon Benedictine (a French herbal liqueur which, legend has it, was developed at the Benedictine abbey of Fécamp in Normandy. The recipe is a closely-guarded trade secret, ostensibly known to only three people at any given time).[1]

***Stir over ice and strain into a chilled cocktail glass
The traditional garnish is a shortbread cookie, served on the side. But when you are short on shortbread, try a lemon twist in the drink.

This weekend, after a long day at the grill and the family is in bed, you should sit back in your leather chair, turn off the television, and enjoy this fairly obscure—but simply amazing—drink.[2]


[1] The drink was actually developed by Alexandre Le Grand in the 19th century, but why detract from the legend?
[2] So obscure, in fact, that one night when the Texan and I were in a well-known cocktail den and he ordered the drink, the cocktail waitress met us with a look of confusion. We were a bit disappointed by the cocktail that was served, but he drank it nonetheless.  At the end of the night, upon checking our receipt, we were surprised to see that it included a “Bobby Brown” (widely regarded as the poet laureate of New Edition).  I guess it was their prerogative.  The lesson we learned is to make sure you order this drink directly from the bartender.  If he tells you that he doesn’t have any shortbread, at least you know that he knows how to make the drink.